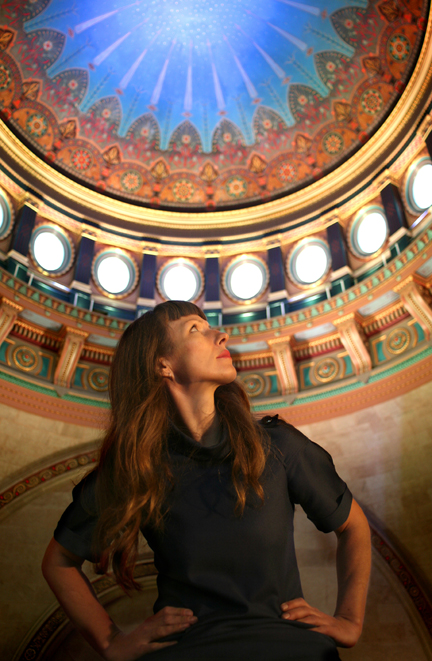 Sandra Spannan, a native of Germany who has lived in NYC since 1993, is a painter, performer, and founder of the decorative painting company See. Painting, Inc.

Her large-scale commercial projects include work for the Whitney Museum, Saks Fifth Avenue, Victoria Secret and CHANEL stores as well as Hotels such as Nu Hotel (Brooklyn), Duane Street Hotel and ACE hotel.

Through her 20 years of experience as a gilder and art restorer, Sandra has a range of techniques that she applies to her work in fine art. Photorealistic images of nature details are the subjects or her artwork, which are created with precious metals (such as 23-karat gold and palladium leaf) applied to custom steel and wood panels.

Sandra’s artwork and performances have been included in group and solo shows in Germany, India and the USA.

Performances include: Vanessa Beecroft’s first NYC performance at Deitch Projects; the Love-a-Commuter project by Artist’s Space; window painting performances at Chashama on W 42nd Street and for the Lower Manhattan Cultural Council’s ‘Looking In’ series. Sandra’s ‘searching for sense’ performance is the subject of a documentary by Oscar-Nominee Katja Esson. It got featured in U.S. festivals, on Channel 13, Swiss and German television. INSIDE/OUT, a collaboration with Laura Barnett, took place in NYC windows (2005-06) and in Berlin’s Galerie Tristesse (2005). The New York Times featured INSIDE/OUT on the cover of the Arts Section in May ‘06 and Sylvia Plachy has photographed the artists for The New Yorker.

Sandra is a member of the Society of Gilders and won Sepp leaf’s 2006 Pride of Place Competition Awards which honors America’s Best Gilding Artistry, Design and Decorative Finishing.

Her work has been featured in The New York Times, a cover story at ARRAY, the New Yorker, Esquire, Vogue, Architectural Digest, Interior Design, Design Times, Paper, and Time Out; German publications include Die Welt, TAZ-Tageszeitung, TIP, ZITTY, Berliner Morgenpost and ALEGRA Magazine; her work has also been featured in Gulliver (Italy) and Hanatsubaki (Japan).

Sandra continues to learn how to beautify  this universe by having studied at the University and Fachhochschule of Wuerzburg, Germany, the New York Academy of Art, New York, USA, several workshops in europe and the USA and yearly extended visits to over 20 foreign countries (India, Middle East, Africa, Europe, North and South America)

Sandra lives in NYC with her husband, the musician TONY JARVIS and their two cute daughters KAYA and FIONA.

Our artists at work: